Americans are angry. According to NBC last year:

Overall, 49 percent of Americans said they find themselves feeling angrier now about current events than they were one year ago. Whites are the angriest, with 54 percent saying they have grown more outraged over the past year. That’s more than Latinos (43 percent) and African-Americans (33 percent).

Seventy-three percent of whites said they get angry at least once per day, compared with 66 percent of Hispanics and 56 percent of blacks.

Republicans, perhaps expectedly, have it worse than Democrats. Here’s how one researcher working in Wisconsin described the mood:

Even before the Great Recession, people told me that they were working hard to make ends meet, and their taxes continued to climb. Where was their money going? They didn’t believe it was coming back to them.

Here’s how they saw it: Working class whites told me that although they could not afford health insurance for their own families, they were nevertheless expected to pay taxes so that public employees could have health care. To add insult to injury, they told me, those folks did not even seem to work very hard. They sit at desks, rather than working with their hands. They shower before work, not afterward. And public school teachers and university faculty got summers off!

Remarkably, Republicans are three and a half times more likely to say that life was better for people like them 50 years ago than worse. And Trump voters had the most dismal outlook of all. 75%!

Among Republicans, Trump voters are also most likely to say that “the economic system in the country unfairly favors powerful interests” (61%), and to say that “business corporations make too much profit” (43%). (Democrats are more likely still.)

Trump voters feel powerless. According to a Quinnipiac poll:

There is widespread agreement, 76 percent, with the statement, “Public officials don’t care much what people like me think.” Agreement is 84 percent among all Republicans and 68 percent among Democrats. Ninety percent of Trump supporters agree, the highest of any candidate.

There is a lower level of agreement, 64 percent, with the statement, “The old way of doing things no longer works and we need radical change.” Agreement is 71 percent among all Republicans and 58 percent among Democrats. Agreement is highest among Trump supporters with 83 percent.

The Atlantic reported something similar:

RAND tested several queries to clearly divide Trump’s support from his rivals. For example, they found that Trump crushes Ted Cruz among voters who both strongly believe that “immigrants threaten American customs and values” and among voters who “strongly favor” raising taxes on the richest American households. But voters who agreed with the statement “people like me don’t have any say about what the government does” were 86.5 percent more likely to prefer Trump. This feeling of powerlessness and voicelessness was a much better predictor of Trump support than age, race, college attainment, income, attitudes towards Muslims, illegal immigrants, or Hispanic identity.

Incidentally, out of everyone, Trump voters are most likely (40%) to have “a very great deal or good deal of confidence in the public’s political wisdom”, which has got to have something to do with one’s preferred candidate taking over an entire party.

Let’s delve in to the sources of anger towards government specifically. Pew found that voters overall were most upset with politicians in general and the system as a whole rather than over specific issues:

What is fueling this discontent? The results of this December focus group with Trump supporters (an in-depth, in person discussion with a few dozen voters) run by Republican pollster Frank Luntz are probably less reliable than those of larger polls, but they give a sense of the spirit of Trump voters. They describe America today as:

For Obama, “A handful used profane words or harsh phrases that are unpublishable here. Out of 29 people, only three believe that Mr. Obama is a Christian and only four think he loves America.” The media is:

Trump voters think that the government is doing too much by an overwhelming margin, though a bit less than other Republicans: 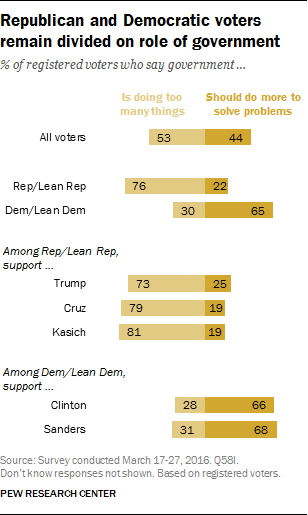 But as we’ll see, this general anger at government mostly doesn’t extend to specific programs.

Wendy Rahn and Eric Oliver looked at whether Trump voters are populists (which we’ll return to). Some of the questions asked are relevant to Trump voters’ attitude towards expertise:

Anti-elitism. What separates populists from authoritarians is their alienation from political elites. We measure this with statements like “It doesn’t really matter who you vote for because the rich control both political parties,” “Politics usually boils down to a struggle between the people and the powerful” and “The system is stacked against people like me.”

Mistrust of experts. Populists often fear not just political elites and billionaires, but anyone who claims expertise. We measure this with questions like “I’d rather put my trust in the wisdom of ordinary people than the opinions of experts and intellectuals” or “Ordinary people are perfectly capable of deciding for themselves what’s true and what’s not.”

They found that among Republicans, Trump voters are by far the most anti-elitist and least likely to trust experts:

Trump voters are also more likely to believe in conspiracy theories. 40% believe that “President Obama is hiding important information about his background and early life,” compared to about 30% for Cruz and Kasich voters. “50 percent of Trump’s supporters said Clinton definitely knew about the attack in Benghazi beforehand. Just 43 percent of Cruz’s supporters and 40 percent of Kasich’s supporters agreed.” According to liberal pollsters PPP in September, “61 percent don’t believe President Obama was born in America” versus 44 percent of Republicans.

The gap between Trump supporters and other Republicans shrinks when considering less obviously political questions. 52% of Trump supporters said that vaccines possibly or definitely have been shown to cause autism, and 21% said that the Sandy Hook school shooting could have been or was faked, but for both of these questions supporters of other candidates gave similar answers. So Trump voters are more conspiracy-minded than other Republicans, but the gap is not especially large.

For comparison, “A majority of Democrats, for example, told Fairleigh Dickinson that it was at least possible that President George W. Bush knew about the terrorist attacks of Sept. 11, 2001 before they occurred.”

It would also be interesting to look at how Trump voters follow the news. Unfortunately, the only thing I could find was this disreputable-seeming survey from October, commissioned by “video startup Wibbitz”, which found that Trump voters were the most likely to get their news from television.

A common complaint among pro-Trump (or at least pro-Trump voter) articles is that his supporters are looked down on as “mental midgets and xenophobic troglodytes who’ve crawled out from their survivalist caves in order to destroy the Beltway Establishment” and that this contempt from elites is helping fuel support for Trump. Unfortunately, I didn’t find research on this question in particular. “Do you feel culturally looked down upon?” would be interesting to ask, though I’m not sure that polling would be enough to establish that contempt is a cause. After all, it could be that Republicans/Trump voters support whom they do for some other reason and are looked down on by the left-leaning media ultimately for the fact that they have different political views. (Remember that people discriminate by party more than they used to.) That is, partisanship can cause derision (both ways, of course), so saying that Trump voters feel they’re held in contempt isn’t enough to show that contempt is a cause. It’s not implausible – the idea that partisan hatred magnifies existing divisions seems likely to me – but it has to be shown.

What voters care about

Exit polling gives us another way to look at what is motivating people to vote for whom. Pollsters asked voters which of four issues was most important to them: 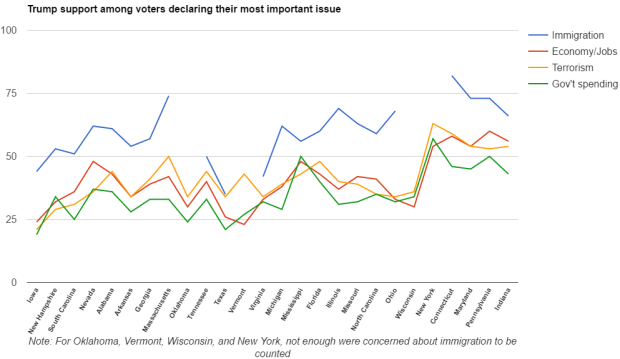 (Data from here; graph created by me; not all states exit polled)

As you can see, voters who cared most about immigration were consistently the most likely to vote for Trump. He more often than not won pluralities among voters caring about the other three issues, but clearly immigration is his strongest issue. However, immigration isn’t actually the most important issue among Republicans. Only an average of 11% of Republicans named immigration, versus 35% for economy/jobs, 23% for terrorism, and 29% for government spending. Thus a plurality of Trump voters actually cared most about the economy, not immigration. In fact immigration provided Trump with the smallest amount of voters (though still important to his success):

(Data from here; graph created by me; not all states exit polled)

We’ve already established that Trump voters are disconnected from organized religion. Whites are less likely to be in unions than blacks, and union membership is in general decline. The less educated (who disproportionately vote Trump even if they don’t make up the bulk of his support) have weaker social ties. And here we see high levels of hostility towards government and the media, and a strong sense of powerlessness. This isolation, in multiple senses of the word, is, I think, another one of the foundations of Trumpism.

Next: How “conservative” are Trump supporters? What are their actual ideological motivations?

Veracities Online is founded on the belief that truth springs from debate. We will never present just one side of an argument. Instead, we hope to offer moderated dialogues, symposiums, overviews of contentious subjects, and so on, that allow readers to more fully grasp the shape of a debate. We won’t always reach agreement, but we will reach for greater understanding.