Social psychologist Jonathan Haidt, along with Emily Ekins, researched how the supporters of different candidates fit in with his moral foundations theory, the idea that people use a number of distinct mental axes to think about ethics, and that people vary by how important each axis is. Haidt has identified six foundations: care/harm, fairness/cheating, liberty/oppression, loyalty/betrayal, authority/subversion, and sanctity/degradation. So, when judging an action, one person may care whether or not authority is respected but not much care whether the action is particularly fair, while another person may do the reverse.

They polled voters to measure their moral foundations. (Only one of the authority questions is about child rearing, and they combined authority with some other foundations, so that measure may not be directly comparable to the other research on authoritarianism. Proportionality is equivalent to the fairness/cheating axis – whether you think “The world would be a better place if we let unsuccessful people fail and suffer the consequences” for instance.) 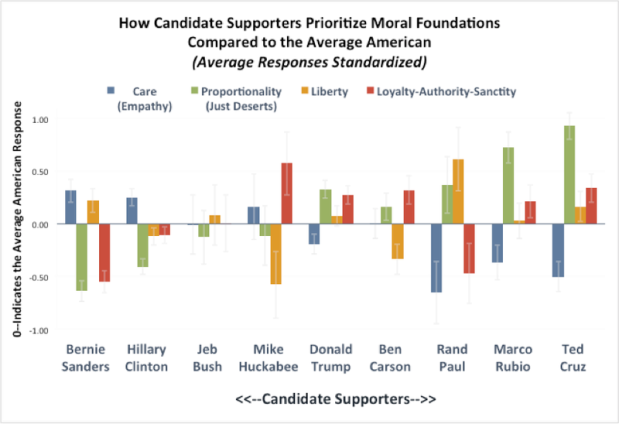 Trump voters don’t particularly stand out relative to the average American. They care less about care/harm (“morality requires caring for and protecting the vulnerable”) and more about proportionality (people getting what they deserve, “highly predictive of a preference for small government and a dislike of activist government and the welfare state”) and a combined measure of authority, loyalty, and sanctity, which the authors finger as the foundations of social conservatism. Their scores on those social conservative foundations are similar to those of other Republicans, and they place less weight on proportionality than some other Republicans, but more on care.

In further comments, Ekins says that:

Because Trump has a larger share of the vote, his supporters’ standardized scores for each moral foundation are more likely to be closer to average. Since 0 indicates the median voter, candidates with larger vote shares will appear closer to average.

They also tested “to see if adding the moral foundations improved prediction above and beyond the demographic factors that are usually used.” They did:

Among Republicans, four moral patterns stand out. First: Voters who still score high on authority/loyalty/sanctity and low on care — even after accounting for all the demographic variables — are significantly more likely to vote for Donald Trump. These are the true authoritarians — they value obedience while scoring low on compassion. They are different from Huckabee supporters, who appeared to score even higher than Trump supporters on authority/loyalty/sanctity, but also scored high on care, as we saw in Figure 1.

Authoritarianism is often assessed in social science research by asking people two or three questions about the relative importance of teaching their children obedience and respect, but our data shows a limitation of this approach: Not everyone who wants their kids to be obedient is an authoritarian. Some past research has been too quick to lump in social conservatives with authoritarians.

A further reason to doubt any simple interpretation of the “authoritarianism” measure.

We have done some preliminary tests finding roughly 2-3 groups [of Trump supporters]. One group scores particularly high on Loyalty-Authority-Sanctity, while another group appears to be less engaged and scores lower on all the foundations. When these different groups are averaged together, the average Trump supporter is closer to the average.

This research on morality and authoritarianism is interesting, but still preliminary I think. It’s perfectly plausible that Trump voters have a different psychological profile on average, but I’d like to see more work disentangling the effects of regional culture, and so on.

Populism isn’t any one thing, so there isn’t any simple test for populism. After all, Trump and Sanders have both been labeled populists and we’ve seen that their supporters have often radically different attitudes and beliefs. Populism is, perhaps, a style of thought that encompasses many different schools of thought. The Washington Post compares populism to authoritarianism:

Populism, on the other hand, is a type of political rhetoric that casts a virtuous “people” against nefarious elites and strident outsiders. Scholars measure populism in a variety of ways, but we focus on three central elements:

Of course, authoritarians and populists can overlap and share dark tendencies toward nativism, racism and conspiracism. But they do have profoundly different perceptions of authority. Populists see themselves in opposition to elites of all kinds. Authoritarians see themselves as aligned with those in charge.

The authors polled voters to see if populist proved a better descriptor of Trump supporters than authoritarian. (I’ve already discussed this paper a few times, including in the section on authoritarianism.) They found that, while Trump voters were more authoritarian than average, populism mattered more: 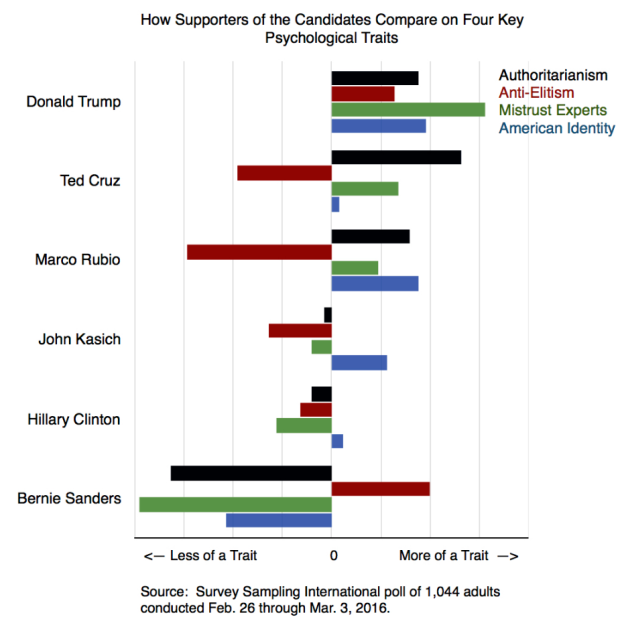 “Trump voters are the only ones to score consistently high on all three populist dimensions.” I’d be interested in seeing more research on this question, but based on everything else I’ve discussed, I think that populism is a better lens to understand Trump than authoritarianism. There may well be authoritarian elements, but there’s more than that going on.

“Populist” is a useful, but vague, shorthand that captures a good deal about Trump’s appeal. I haven’t had time to discuss the history of right-wing populism in the United States (let me know if you’d like a series on that!), but I think that there’s a strong case to be made that Trump is best understood as part of that tradition. Remember that support for segregationist George Wallace in 1968 was a strong predictor for a county’s support for Trump in 2016. And they’ve drawn from similar wells of support: “overwhelmingly white, not college educated, racially intolerant, hostile toward immigrants, dismissive of social progress, and facing bleak economic prospects.” Analogies have even been made to Andrew Jackson’s candidacy almost two centuries ago, each being “a wealthy celebrity always ready for a fight, a superpatriot who says he will make America great again. He vows to attack government corruption and defend the common man.” And all three men with particular appeal to Appalachia. (Which isn’t to say that Trump supporters hold all the same views as their antecedents, but that they occupy a similar political position.)

I don’t know of a specific term to capture this tendency, but “Appalachian Populism” wouldn’t be too far off the mark, if perhaps too narrow. But a label is less useful than knowing everything to which the label refers.

After all these words, all these graphs, all these polls, all these numbers, it’s time to bring things to a close and review everything we’ve covered. What can we say about Trump supporters?

Thanks for reading! Up next, a dialogue on objective morality.

Veracities Online is founded on the belief that truth springs from debate. We will never present just one side of an argument. Instead, we hope to offer moderated dialogues, symposiums, overviews of contentious subjects, and so on, that allow readers to more fully grasp the shape of a debate. We won’t always reach agreement, but we will reach for greater understanding.